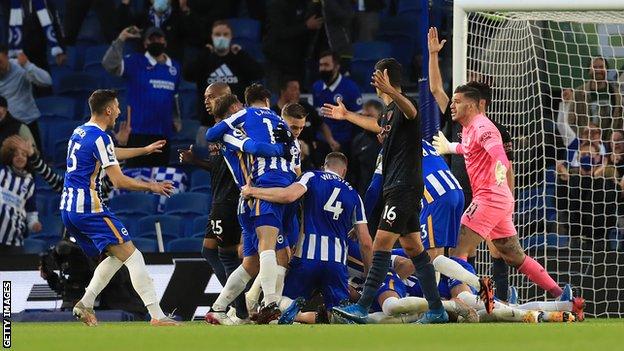 Brighton & Hove Albion defeated Manchester City 3-2. City scored the first two goals. Gundogan (‘2) and Foden (’48) scored for City. Brighton then scored three goals with Trossard (50), Webster (’72) and Burn (’76). Recall that City played with 10 players from the 10th minute after Cancelo was penalized with a red card

However, City in this match played for more than 80 minutes without a player after Cancelo was penalized with a red card.

The champions started this match very well as they managed to score a goal in the second minute of the match where Gundogan scores with his head after a beautiful cross by Mahrez.

But, while the match was going well for City, in the 10th minute Cancelo will be punished with a red card.

This after a bad intervention of his where the judge punished him with red after the review of VAR.

The first half would thus end with City’s easy lead.

The champions would score once again with the start of the second half where in the 48th minute Foden would score a goal.

But after the goal, Brighton will be activated.

Initially, after two minutes the result would narrow Trossard.

The equalizer would come in the 72nd minute where he would score with Webster’s head after Gross’ cross.

Four minutes later, Daniel Burn would also score, also with his head to reverse the result.

This victory did not do anything for Brighton but does not cause headaches for City either as both teams have achieved their goals that they set at the beginning of the season.

Manchester City are aiming for the title they have already won, while Brighton has risen to 15th place despite securing survival in the Premier League three weeks ago.