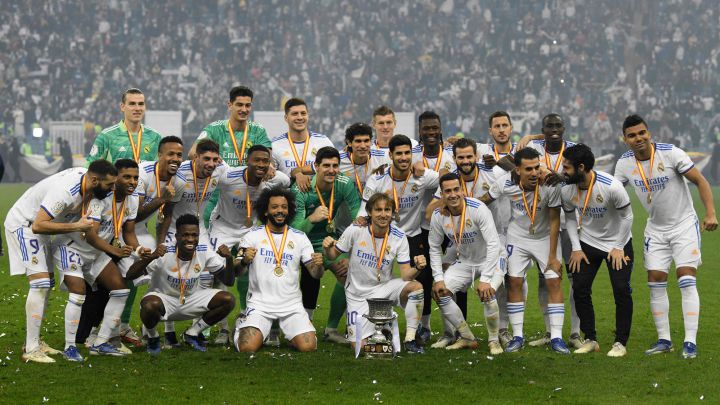 The Super Cup is of Real Madrid

Real Madrid has won the Spanish Super Cup by defeating Athletic Bilbao in the final. Modric (38) and Benzema (52) were the goalscorers for Los Blancos. This is the first trophy this year for Real Madrid.

Real Madrid has managed to be adorned with the first trophy for this year, after winning the Spanish Super Cup final by defeating Athletic Bilbao 2-0. Modric and Benzema scored the two goals of this match.

The match started balanced and until the 38th minute there were no chances to score, as both teams did not manage to create many chances.

The first goal would come exactly in the 38th minute. Rodrygo made a good penetration on the right wing to follow for Modric, who made a strong shot to score a beautiful goal for Los Blancos.

But the result would have had a chance to equalize if Sancet had used a golden opportunity to score in the 45th minute of the first half.

The second half would be more open and Real Madrid would attack more. Thus Alvarez would cause the penalty in the 50th minute after touching the ball with his hand inside the penalty area, the penalty that was given only after the review with VAR.

From the bad point, Real Madrid top striker Karim Benzema would score to double the score in the 52nd minute of the meeting.

After scoring the second goal, Real was a bit more sleepy and Athletic Bilbao would attack more.

Raul Garcia did attempt a finish, but from an bad position, sending the ball into the away fans.

Things got tough in the end for Real Madrid when Eder Militao with his hand stopped a safe goal by Raul Garcia and caused the penalty in the 87th minute.

This penalty was also given after it was seen in VAR where Militao was punished with a red card leaving Ancelotti’s team on the field with 10 players.

But Garcia would manage to deny Garcia the goal after Courtois waited.

In the remaining minutes, although Bilbao risked, they did not manage to narrow the score until Real Madrid managed to win the first trophy this year by defeating the Basque team, Bilbao in the Super Cup final.